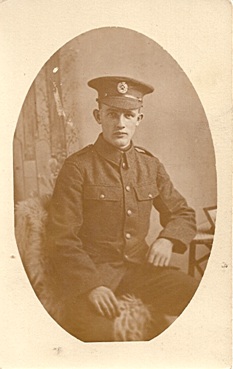 At present only one eye-witness account of the events surrounding the blowing of the Red Dragon Crater is known to exist. Conserved in the Redruth Old Cornwall Society Town Museum, the diary of Sapper (later Lieutenant) John French recounts in harrowing detail the events of 22nd – 30th June 1916. Although there are several tunneller officer’s accounts and testimonies, diaries written by Sappers (this term, peculiar to the RE, equates to that of a private soldier) are extremely rare.

Born in 1892, when war broke out John French joined the Royal Engineers. On 31st December 1915 he sailed for France. Arriving in Rouen he was attached to 250 Tunnelling Company before transfer to 254 Company in the Givenchy sector on 9th March 1916. The following excerpts are reproduced by kind permission of the French family and the Redruth Town Museum.

22nd June, 1916
We left for the trenches at two o’clock this morning. We got as far as the canal and found that the Germans were shelling the road. We took cover for a while until the worst of it was over. They must have sent over two or three hundred big shells in a couple of hours. You could hear them coming in the air like express trains. Most of the French people left their homes and made for the town. When we moved up the road we found it full of big shell holes, some as big as small mine craters. The road was covered with branches of trees, earth and telephone wires. When we got near the trenches we heard that the Germans had bombarded our trenches & then blown up a big mine [Red Dragon] right under our lines at a quarter past two that morning doing a lot of damage. We met some wounded coming out & fellows without rifles, tunics or hats & in a dazed state.

We entered the communication trench & started up. We had not gone far before we found the trench blown to pieces & in some places practically levelled. It was just ducking, dodging & crawling over the top from then on. When we reached the place where the mine had gone off we could not recognise the place it was altered so, great gaps in the parapets where you could see the German lines easily & where the mine had gone off or series of mines, there was an enormous crater with dead and wounded, both Germans & British for the Germans had made an attack right after the explosion. They got in our trenches but very few got back again, for after the first shock our men got together splendidly & there was some fierce hand to hand fighting. The enemy carried hand grenades and daggers beside rifle & bayonet, meantime a party of our chaps had got around & cut their retreat off & they say that very few ever got back. There was a German officer lying dead just over the back of our trench with a grenade still in his hand. There was also one of our officers who had killed three Germans in hand to hand fighting finally being killed himself with a dagger thrust. There were a lot of wounded lying about, some put in dug-outs until they could be taken away. Two of our squad dug out a sergeant of M – out of the debris, he had a leg and arm broken & was half buried. He said the mine did it and then he saw the Germans coming so he covered his head with sand – bags & they passed him by. I helped with others to take him to the dressing station. I saw our chaps dressing the wound of a German prisoner in the trenches, it was only a scratch but he was making a lot of fuss about it, a big chap too, over six feet high. They took another prisoner back on a stretcher. It must have been a fierce struggle while it lasted for there were scores of hand grenades & a lot of German equipment lying around & blood on almost everything. Five of our Coy, are buried in one of our mine galleries, through the gallery crushing from the force of the mine explosion. We can speak to them through the air pipe & they are all alive. We have been working all day trying to get to them, pumping air in to them & pumping water out to keep them from being drowned, for it is a very wet place. There are also two of our corporals missing. Lots of our Coy. had very narrow escapes from being buried & being captured. The entrance to some of the saps were blocked & the Germans missed in their hurry the men inside. Another chap got away after being told to put up his hands.

23rd June, 1916
Those five men are still entombed. We have been working night and day trying to get them out. It is 25 feet to go & we are in 15, but it is very slow work owing to so much broken timber and running muck. They are still alive and we can speak to them. No trace yet of the two men that are missing. They are still digging up some dead up in the trenches. I saw one of our fellows & a German officer lying in the trench going in today.

24th June, 1916
Got out three of the five men last night. One of the others [Thomas Collins] had some ribs broken & could not crawl through the very small hole that had been driven through. The other fellow [William Hackett] offered to stop in with him until they could make the hole bigger so they passed in some food to them. They had no sooner done that than there was another fall & they were entombed again.

The night before last our men expected the Germans to come over again & they were ready for them. The Scotch lay on the ground in front of the parapet & the Welsh stood on the firing step waiting for them. They took their tunics off & stripped up their shirt sleeves so as to give their arms more freedom. When they found the enemy wasn’t coming over they made a bombing raid on their trenches. I heard some of the fellows say that they had come through the war right from Mons, but for the time it lasted, the German bombardment on the morning the mine went up was the hottest they had seen. I forgot to mention that our artillery heavily bombarded the enemies trenches the same morning & must have done considerable damage for we could see Germans repairing their trenches afterwards.

25th June, 1916
Those two fellows still entombed. Had to start a new gallery to try & get to them but with the water & running muck it is a heart-breaking job. We cannot get any answer from them now. Men are working hard at it night and day. Fritz keeps on sending over rifle grenades & trench mortars all the time. We had some of our Coy. killed with a rifle grenade yesterday afternoon, it was one of the fellows who came with me from the other Coy. & previous to his going on leave last week we worked together for a while. No news of our two men who are missing yet.

26th June, 1916
Still trying to get through to those two men, but it is painfully slow, we can’t get any answer from them. Saw a thrilling air-fight yesterday between three of our machines and six German machines. It took place right over our lines and down pretty low. We had a splendid view & it lasted for quite a while. One of our machines came down afterwards near where we were standing to take the observer to a dressing station. He had been shot through the chest and died before they got him there. Another of our machines had to come down & an artillery observer said that he saw two of the German planes come down. The German planes seemed much faster & much faster on the turn.

27th June, 1916
Abandoned all hope of getting those two chaps out this morning & stopped all rescue work for the condition of the shaft was so bad as to endanger the lives of the men working down there and they think that they are both dead. That chap Hackett died a hero for he could have come out with the others but would not leave his injured comrade. Saw the – armoured train with a big gun in action today. Our artillery has also been very busy today.

28th June, 1916
Another of our Coy. Killed today, accidentally whilst cleaning a revolver. The enemy tried another raid early this morning following the blowing up of a mine, but were easily beaten off leaving a number of dead behind. Our artillery has been very busy again to-day cutting the enemies wire and shelling the support trenches. Saw the armoured train in action again to-day.

29th June, 1916
Things very quiet in the trenches to-day. Our artillery opened fire on a German working party who were working just in front of us. We could plainly hear them working. The shells whizzed over pretty close to our heads. The Germans started so send some back, one pitched right in the trench and wounded two of our infantry.

30th June, 1916
Things rather quiet to-day with the exception of some bombarding by our artillery. We had new iron rations issued to us to-day. Weather rather cold and showery. We are on the eve of a great British offensive for it starts tomorrow morning [Somme]. It’s going to be something big this time.

2nd July, 1916
Our Coy. was inspected today by Gen. Landon commanding our Division. After the inspection he made a speech in which he paid tribute to our Coy. for good work done at Givenchy & said how much he appreciated the gallantry of our men on the 22nd June, especially that of Hackett who laid down his life. He also spoke of the great offensive that started and that they were making satisfactory progress. The Germans blew up a mine yesterday burying two more of our Coy. One more chap gone from the party who came from the 181st Coy. with me.