We knew the man Sapper William Hackett refused to leave alone underground was Private Thomas Collins, 14th Battalion, Welsh Regiment (Swansea Pals). In March 2010 utilising media outlets (local newspapers, radio and BBC Wales) we began a search for descendants of Thomas Collins. Full details of our successful search can be found in the entry from 15 March 2010 on the News page. 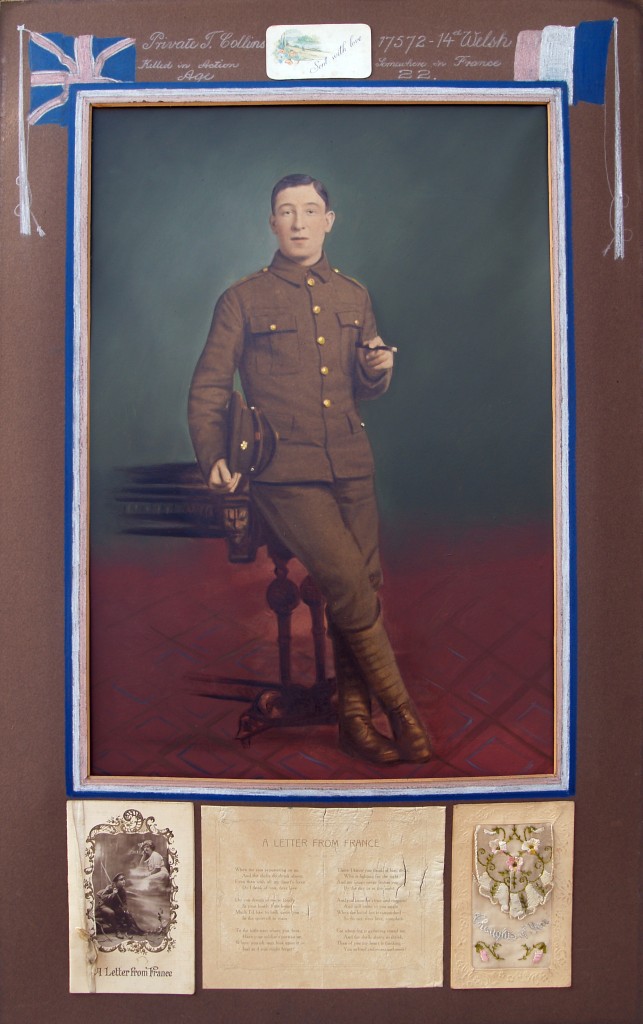 Private Thomas Collins. This painting hung in his mother's parlour for the remainder of her life. It now hangs in the Victoria Cross exhibition inthe Royal Engineers Museum.

Within a week of the newspaper article being published we were delighted to speak with one of Thomas Collins’ nephews, Mr John Abraham of Townhill, Swansea. Along with his cousins, Terry and John Carroll, he attended the unveiling ceremony of the Tunnellers Memorial on 19 June 2010. Please find below details about Thomas Collins, his background, family, war service and death.

The Commonwealth War Graves Commission Debt of Honour record stated that Thomas Collins died on 22 June 1916, aged 22, and that he was the son of Mr. and Mrs. Collins of 38, Colbourne Terrace, Swansea. This was actually incorrect as the family lived at number 58. This has now been corrected on the Debt of Honour record. He is remembered on the Thiepval Memorial on the Somme.

At the suggestion of John Abraham the remarkable colour painting of Thomas Collins has been lodged with the Royal Engineers Museum at Chatham. It now hangs in their permanent Victoria Cross exhibition just yards from the exhibition case showcasing Sapper William Hackett’s action which earned him his VC and cost his life.  As the stories of the two men are inexorably intertwined there is a potent symbolism in their pictures hanging near to each other while they both lie entombed 40 feet below the fields of Givenchy.

The 1901 Census records show 6-year old Thomas as the son of widower, John Collins of 5 Castle Walls, Swansea (in the parish of St Marys). This street has long since been demolished but is close to the current Argos store in the city centre. At that time John, born in Swansea, was 40 years old and working as a Dock Labourer. The other adult living at 5 Castle Walls is 28 year old Rachel Balling, a housekeeper. The children listed are 6-year old Tom, 4-year old Daniel, 2-year old John and a 6-month old daughter named Nellie.

The 1911 Census reveals that John Collins and Rachel to be married and living at 5 Castle Walls. Strangely, the census shows they have been married 17 years. This record means that Rachel Collins (nee Balling) to be the mother of Thomas, Daniel, John and Nellie. This has been verified by John Abraham who assured me that Rachel was definitely the mother of all the Collins children. This discrepancy between the 1901 and 1911 census is unexplained. In the intervening ten years since the 1901 census John and Rachel have had three further children: Alice (8) and James and William (2). John Collins is still a Dock Labourer. Thomas is now 16-years old and working in a bottling store.

Sadly, Thomas’ wartime service record was destroyed during German bombing in the Second World War. We know that he joined the 14th Battalion, Welsh Regiment (Swansea Pals) as his name appears on a list of the men who sailed for France in December 1915, compiled at the time by the battalion formation committee. It is typewritten and not 100% accurate: his initial is noted as ‘F’ instead of ‘T’, and the next of kin as his mother, Rachel Collins of 50, Chili Crescent. Research has shown that this should be Shelley Crescent. The road (now renamed High View) is in the Brynmelyn area of Swansea.

A search of local newspapers from 1916 revealed the following photo of Thomas Collins. It is taken from the South Wales Daily Post of Thursday 13 July 1916 and is reproduced here with grateful thanks. The text reads:

“THOUGHT A GREAT DEAL OF” Pte. T. Collins, Welsh Regiment, son of Mrs Collins of 50 Shelley-crescent, Swansea, who has been killed. A chum of deceased wrote: “He was the nicest fellow anyone wished to meet, and was thought a great deal of by both officers and men.” 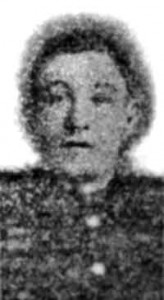 Following his death in June 1916 the family would have been informed through the usual channels. In the 1920s when the cemeteries and memorials were being created, the IWGC (later CWGC) asked for information from families. As noted earlier, the CWGC record shows Thomas Collins to be the son of Mr & Mrs Collins, 38 Colbourne Terrace, Swansea.

Electoral rolls show that in 1918 John Collins actually lived at No. 58 (not 38) Colbourne Terrace. Colbourne Terrace is just two streets away from Shelley Crescent (now High View). The family had clearly moved house but had remained very much in the local community. A further electoral roll for 1938 showed the householder of No.58 Colbourne Terrace to be Rachel Collins. From this information we can only assume that John died between 1918 & 1938 (he would have been 59 in 1918 so this is most likely) leaving the house to his wife. The last electoral roll consulted was dated 1950 and it showed a W. Collins living at No.58. This was William Collins, youngest son of John & Rachel, brother of Thomas, who would have been 41 years old in 1950.

Sadly, 58 Colbourne Terrace no longer exists. The houses run from 1-55 on one side of the street and 56 up to 100+ on the other. House numbers 56-82 were demolished in November 2001 and a park was created in a bid to improve that part of the city.

With grateful thanks to staff at West Glamorgan Archive Services and Swansea Central Library for their help. Sincere thanks to Bernard Lewis, author of the book “Swansea Pals”, and Bernard Morris, local historian extraordinaire who were both unfailing in their support and generous with their time. Final thanks to  John Abraham,  John Carroll, Terry Carroll and the Collins family for their generosity and enthusiasm.