The Tunnellers Memorial was unveiled on 19 June 2010 in a ceremony attended by hundreds of people as well as local press and French and British television news crews.

The day had started breezy and the weather forecast did not look promising for the afternoon’s events. The organisers arrived at Givenchy hours before the ceremony and set to transforming the Salle des Fetes with wartime aerials, images and panoramas. Two barrels of the specially brewed ‘William Hackett Ale’, brought over by Head Brewer John Lloyd of Barngates Brewery, were set up ready for the guests. Meanwhile work started near the memorial site. The protective wooden box that had covered the memorial since its construction six weeks before was removed and a black cover adorned with the Tunnellers yellow ‘T’ was draped over the structure. A large yellow timber ‘T’ fabricated by ex-Sapper Roderic ‘Del’ De Lorme was erected in the nearby field on the exact site of the Shaftesbury Shaft, whilst a line of red flags marked the trace of the destroyed gallery in which William Hackett VC and Thomas Collins still lie.

Guests began arriving around 1pm. Soon afterwards the Nottingham Band of the Royal Engineers (Volunteers) began playing. Joined by French standard bearers and locals they started a rousing musical tour of the village, playing up to the church and around the houses, arriving back at the Salles des Sports at 1.45pm.  An honour guard was provided by 170 (Infrastructure Support) Engineer Group, Royal Engineers. The dark skies, for so long threatening to open, finally did so and the ceremony began in squally showers and a gusting wind.

A welcome was given by Monsieur Jacques Herbaut, Maire de Givenchy along with an explanation of the order of service. English translation was provided by Givenchy resident, Mme. Tracy Bernard. The crowd were then addressed by Lieutenant General David Bill (late Royal Engineers) who was representing the Corps of Royal Engineers and the Chief Royal Engineer. Further speeches were given Peter Barton, instigator and designer of the memorial and expert on the underground war. The speeches were concluded by Jeremy Banning who read extracts from Sapper John French’s extraordinary eyewitness account of the incidents surrounding the Red Dragon mine blow and subsequent efforts at rescue in June 1916. 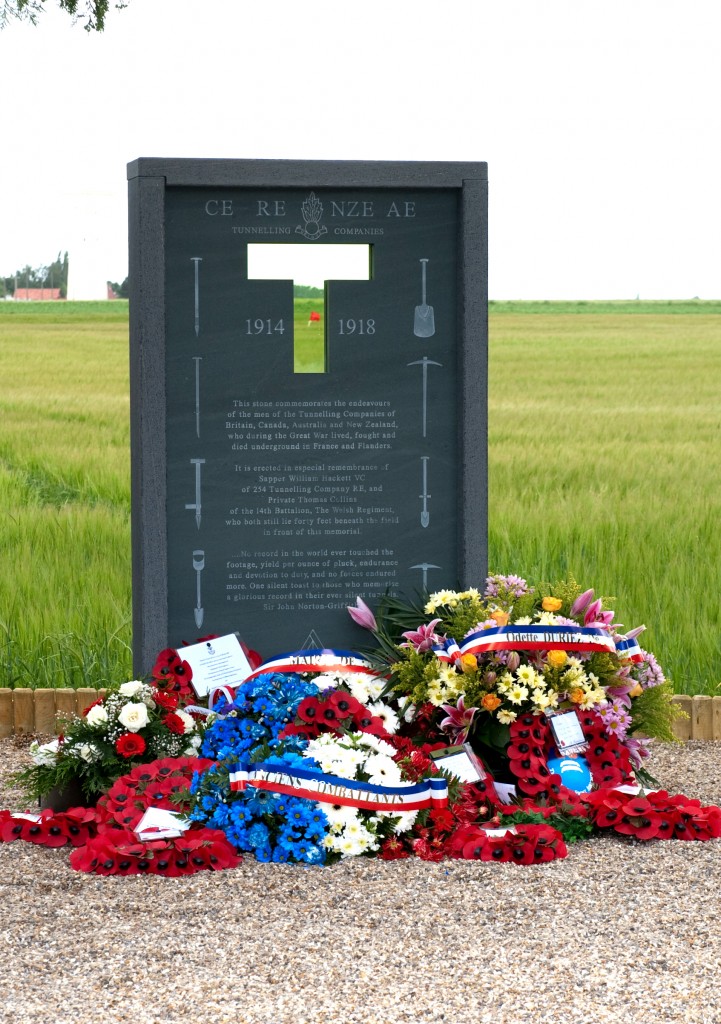 The Tunnellers Memorial resplendent with wreaths after the unveiling ceremony.

We then all moved down to the roadside and witnessed the indomitable Reverend Pat Aldred, standing next to the yellow T at the site of the Shaftesbury Shaft, conduct a moving blessing for Sapper William Hackett VC and Private Thomas Collins. This was followed by the Last Post, two minute’s silence and the Reveille.

The final stop was at the recently renovated memorial site where the Exhortation was delivered by WO1 Philip Moffitt RE. The Tunnellers Memorial, flanked by the honour guard, was then unveiled by Monsieur Jacques Herbaut, Maire de Givenchy, and Monsieur René Cuvelier, Premier Adjoint au Maire. Wreaths were laid by invited officials and the Marseillaise was played followed by the national anthems of Great Britain, New Zealand, Canada and Australia (honouring each of the countries who contributed Tunnelling Companies during the war). The ceremony ended with an opportunity for guests to lay their own wreaths and tributes. By now the sun had broken through and it was with great delight that we eventually moved to the Salle des Fetes/Memorial Hall for the Vin d’Honneur and a much anticipated taste of the William Hackett Ale.

Our sincere thanks go to all who helped us in this project in a myriad of ways. If your names are omitted here it is only through our negligence. We would however like to single out the following for their attendance and in helping to make the day the undoubted success it was:

Our thanks also go to all those who had tunneller antecedents. It was most touching to see the large number of relatives joining us to offer permanent recognition of the endeavours of these remarkable men, and what they achieved in the Great War.