As a tie-in to the BBC/Working Title adaptation of ‘Birdsong’ that airs tomorrow night at 9.00pm on BBC1 there has been much recent interest shown by journalists looking for real stories of tunnelling in the Great War.  At the invitation of Peter Barton, the Birdsong actors Eddie Redmayne and Joseph Mawle visited La Boisselle in June 2011, going underground to explore some of the Glory Hole tunnel system. Details of this can be found on the La Boisselle Study Group website here: http://www.laboisselleproject.com/2012/01/20/birdsong-by-sebastian-faulks-%E2%80%93-a-two-part-adaptation-by-working-title-television-for-the-bbc-broadcast-sunday-22-january-and-sunday-29-january-2012/

Today saw the Daily Mirror publish an article entitled ‘The real hero tunnellers of World War One who inspired BBC’s Birdsong’. It focusses primarily on William Hackett’s story and also covers some events at La Boisselle. Please click on the Newspaper name below to read the story.

We welcome visitor’s comments on the website and would appreciate hearing the thoughts and recollections of those who joined us for the memorial unveiling on 19 June 2010. Special thanks to Shaun Cook for his patience and hard work on the website, Ian Clowes for his superb photographs, Del for his song and Mrs Freda Warren for providing us with a link to her grandfather  Sapper William Hackett VC.

We are pleased to report that the Commonwealth War Graves Commission Debt of Honour entries for Thomas Collins and his brother Daniel have now been amended. The CWGC were approached in March 2010 as the “Additional Information” field gave different addresses for each man – a fact that threw us in the research process. We also asked that they acknowledged the loss of each brother in this field – a request that was acceded to. The pages now say:

The memorial was unveiled on Saturday 19 June with a crowd of approximately 300-400 people in attendance. Special guests of note included General David Bill (late RE) representing the British Army, the defence attaches of Canada and New Zealand, the mayor and villagers of Givenchy-Lez-La Bassée as well as many British attendees from historical organisations and museums plus many tunneller’s relatives – including family descendants of Sapper William Hackett VC and Private Thomas Collins.

A detailed write-up of the day with photographs, videos and text will soon be made available on the website. 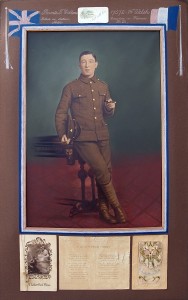 We are delighted to announce that we have been contacted by Mr John Abraham, nephew of Thomas Collins.  John read of our appeal in the South Wales Evening Post and got in touch a few days later. Naturally, we were delighted and following a number of phone calls we travelled to Swansea on Friday 12 March to meet.

BBC Wales were in tow as we visited the Swansea Cenotaph to view Thomas Collins’ name on the memorial, Thomas’ old address that he enlisted from (50 Shelley Crescent – now High View) and then Colbourne Terrace where his family moved to post-war (Thomas’ youngest brother William lived at No.58 until his death in the 1990s). We then capped a moving day by visiting John at his house where we were welcomed in and shown the most amazing 3ft x 2ft framed picture of Thomas Collins in khaki with what looks like cards that he sent home from France stuck around the outside of the frame. This had sat in his mother’s parlour (along with a framed photo of his brother Daniel – sadly also killed in the Great War whilst serving with the RNVR) for the rest of her lifetime. These remarkable pictures were clearly treasured possessions and a real tribute to her two eldest boys lost in the war. Mr Abraham has also indicated that he would be delighted to attend the memorial unveiling on 19 June along with other members of his family.

The BBC covered the story in a number of formats.  A four minute feature went out this morning on the breakfast radio show ‘Good Morning Wales’.

There was also a feature on ‘Wales Today’ at 6.30pm, the BBC’s national news programme for Wales. The BBC also covered this on their website today.

Please find below pictures of our visit to Swansea and meeting with John Abraham. 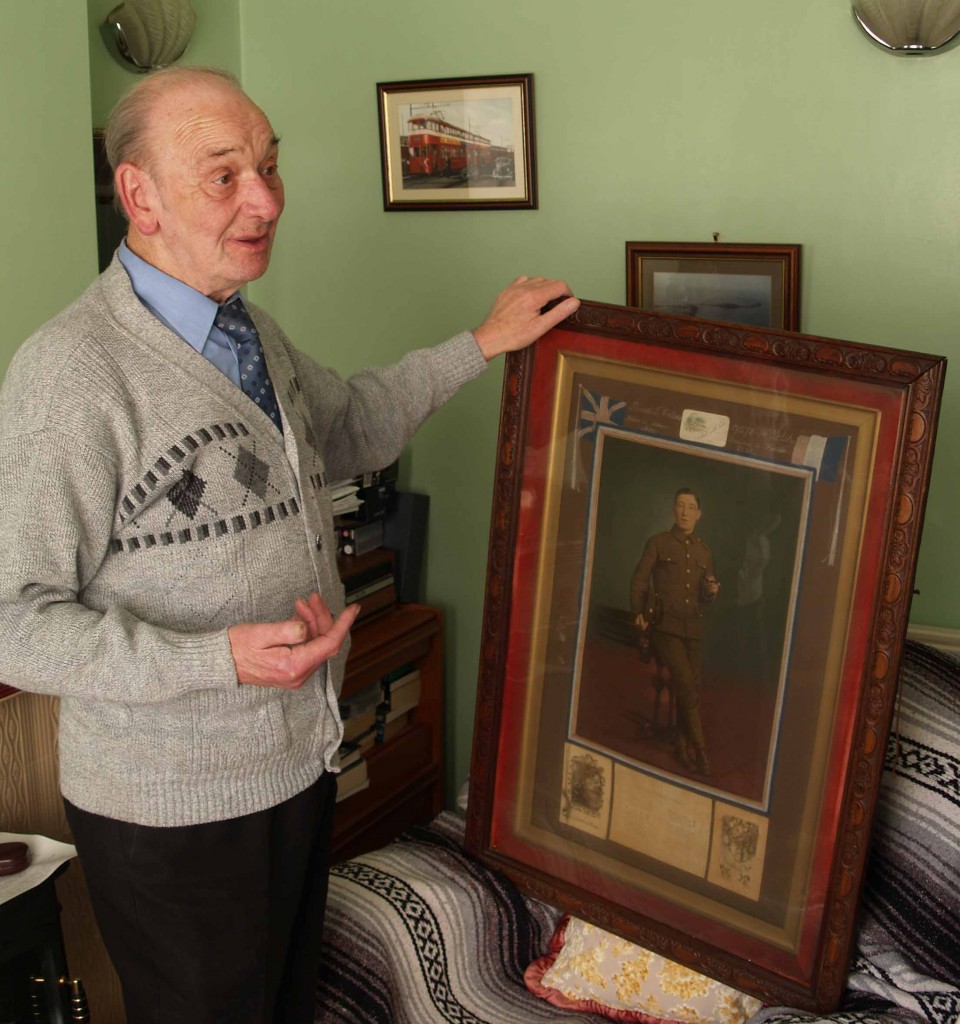 John Abraham with the framed picture of Thomas Collins 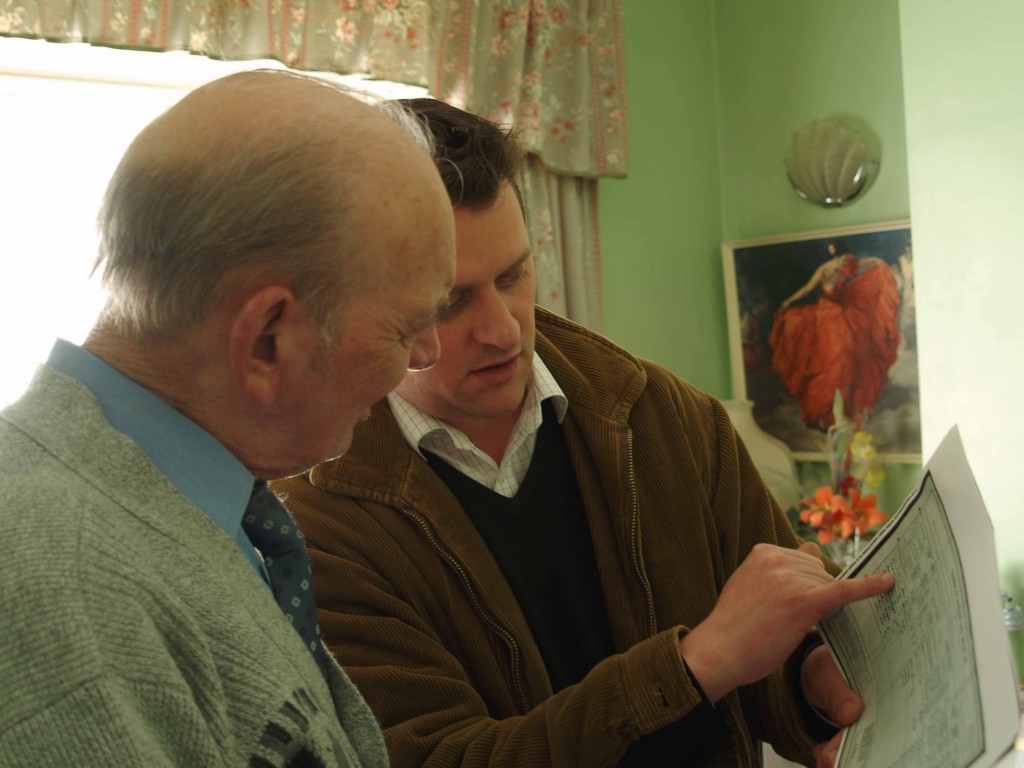 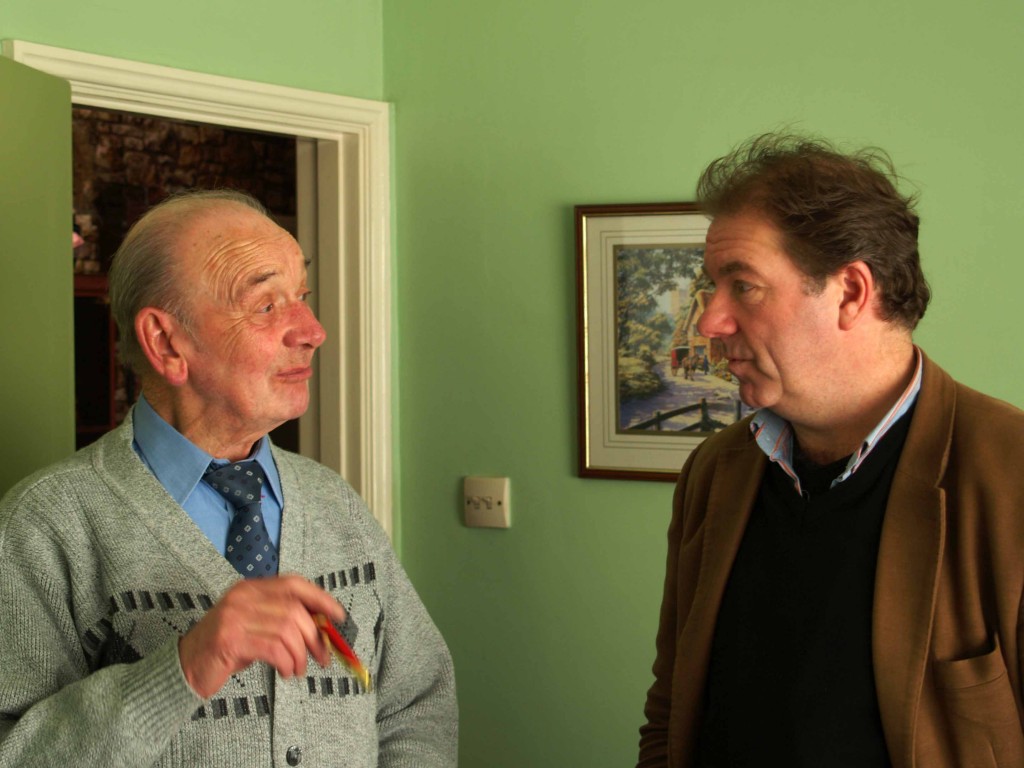 Today sees the start of our effort to trace descendants of Swansea-born Thomas Collins. This morning we were interviewed on ‘Good Morning Wales’, the breakfast show for BBC Radio Wales. Jeremy Banning also had an early start and a 6.50am interview with the Breakfast Show on BBC Radio Bristol.

For those of you in South West Wales, the daily newspaper ‘The South Wales Evening Post’ has an extended article all about the Tunnellers Memorial and Thomas Collins. This is in the ‘Looking Back’ section of the newspaper. Please click here to see a scan of this article.

We are grateful to the BBC and The South Wales Evening Post for helping us publicise our search. We would be delighted if any descendants of Thomas Collins could join us for the memorial unveiling on Saturday 19 June. Should any readers have any information about family or descendants of Thomas Collins then please contact us. Details can be found here.

As January’ news update mentioned, we are making a concerted effort to publicise the Tunnellers Memorial. The last month has seen us contact every regimental museum in the country and we have received great feedback and support from these establishments. We have also focussed on the mining industry, having recently contacted Camborne School of Mines, the premier world establishment dedicated to the teaching and the research into mining technology.

Contact has also been made with the National Coal Mining Museum for England, Big Pit:National Coal Museum in Wales and the Coalfields Regeneration Trust (situated within a mile of William Hackett’s old mine and house at Mexborough).
The memorial organisers would be delighted to hear from anyone with suggestions for other organisations/establishments to contact. Our email address can be found on the ‘Contact & Donate’ page.

The start of the New Year sees us making a concerted effort to ensure people know about the Tunnellers Memorial. Updates have been added to the Great War Forum and the WFA Forum. The next few months will see posters appearing at popular battlefield sites and information being disseminated via regimental organisations – we would like all those who wish to attend the unveiling on 19 June to be assured of a warm welcome in joining us to remember the endeavours of the Tunnelling Corps.

In recognition of the huge interest shown in the First World War by both serving and retired police officers we contacted the National Association of Retired Police Officers and are delighted that they have included the following appeal on their website and plan to include this in their May issue of the NARPO News. 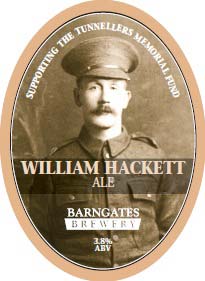 November saw the launch of Barngates Brewery’s new William Hackett Ale. This commemorative beer has been brewed to help raise funds for the Tunnellers Memorial Fund. The ale was a great success and has now sold out. A further brew will take place later this year prior to the memorial unveiling. Details and advance warning will follow.

The national press covers the finding of Sapper John French’s diary. In 30 years of research by Peter Barton this newly-discovered diary gives the first detailed account of the blowing of the Red Dragon mine and the subsequent rescue attempt of Hackett, Collins and their comrades. Please read EYE-WITNESS ACCOUNT section for diary entries.

Of all the acts of heroism that have been rewarded with a Victoria Cross, it is, perhaps, the most noble. […] Sapper William Hackett spurned the opportunity to crawl to safety in order to remain behind to comfort a wounded comrade, before a second collapse sealed the two men in forever.

A Tommy’s amazing long-lost diaries telling of the hell of life in the trenches have come to light after more than 90 years.

With shells screaming overhead and German snipers only 75 yards away, just staying alive was a remarkable achievement. Yet huddled in the mud-filled trenches, Sapper John T French found the time to compile a remarkable diary.

The tragic story of the Nottingham miner awarded a Victoria Cross after refusing to leave an injured colleague. Hackett was one of 10,000 other tunnellers whose work was an official secret until the 1960s.

We welcome visitor’s comments on the website and would love to hear the thoughts and recollections of those who joined us for the memorial unveiling on 19 June 2010.