Along with William Hackett and Thomas Collins we know of one other soldier inextricably linked with this story. His name was Isaac Rees Evans and, like William Hackett, he was a tunneller in 254 Tunnelling Company RE.

Like many of his generation William Hackett was illiterate and it was Evans, one of William’s friends in the company that wrote his letters home for him.  Following William’s death in June 1916 Evans wrote to Alice Hackett telling her the news and expressing his sorrow at her family’s loss.

We know little about Evans’ life but have gleaned an outline from various sources.

His wartime service in France began in December 1914, serving as a private in the Royal Welsh Fusiliers. Unfortunately, at present it has been impossible to determine his exact battalion but it appears likely that it may have been either the 2nd (Regular) or 4th (Territorial) Battalion. He served with the RWF for just over a year from his arrival in France, being discharged on 6 December 1915. We have no details as to why he was discharged or of his enlistment in the Tunnelling Companies of the Royal Engineers.

Following William Hackett’s death in June 1916 254TC continued working in the Givenchy sector until May 1917 when they moved north to the Ypres salient. The company remained here throughout the Third Battle of Ypres, constructing essential dugouts to protect the men from shellfire.  In March 1918 the company were working on a number of dugout schemes on the Passchendaele battlefield – notably the construction of various Battalion Headquarters on ground to the west of the village of Passchendaele. It was during this work that Isaac Evans, by now a Corporal, was killed on 13 March 1918. His body was buried in Oxford Road Cemetery, Wieltje in Grave V.J.30 next to another 254TC man to be killed that day, Sapper Lewis Leigh. 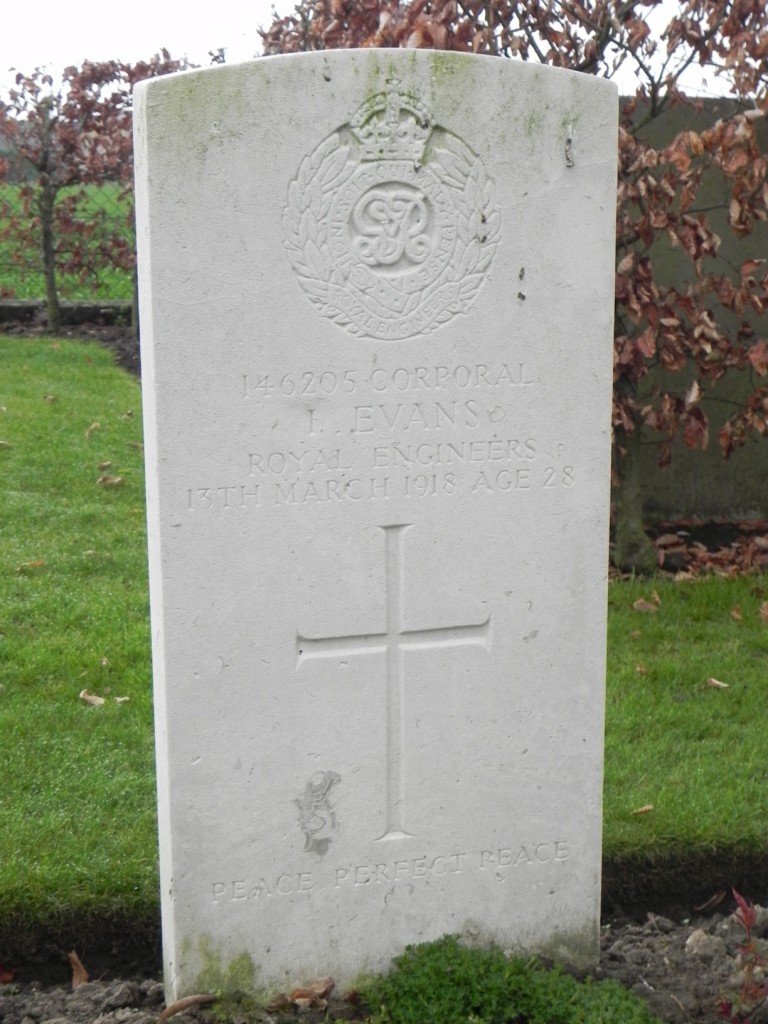 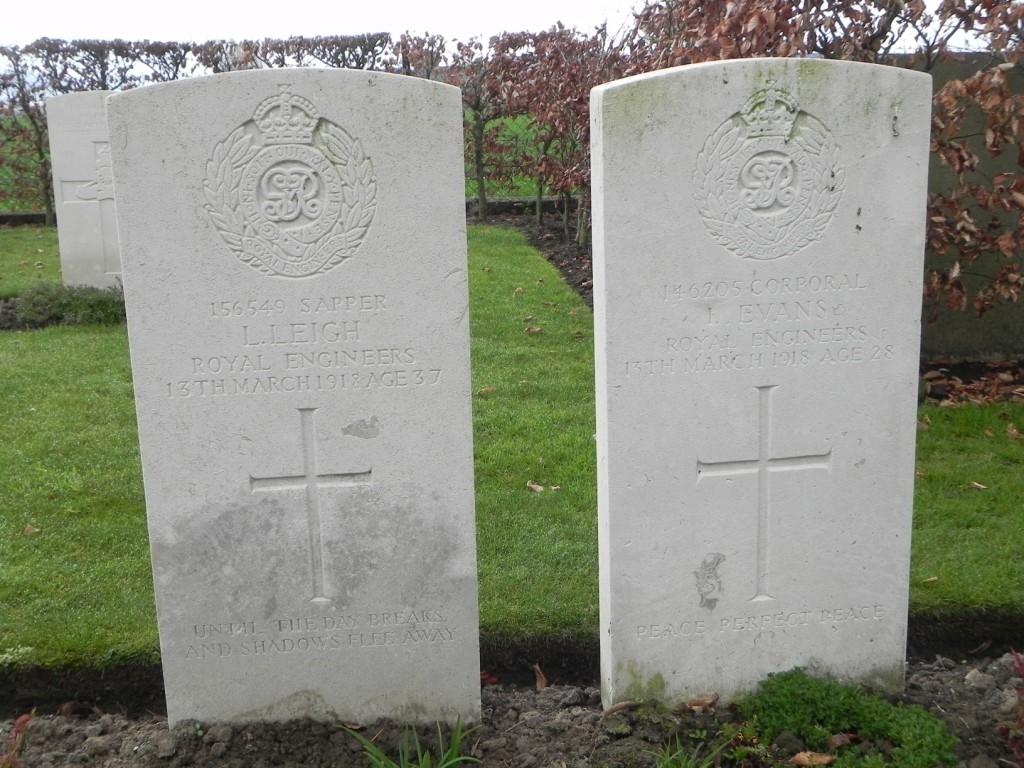 Leigh & Evans, side by side in Oxford Road Cemetery

Evans’ letter of condolence to Alice Hackett told of his desire to visit her after the war ‘if I am spared’ in order that he could ‘tell it the way it happen[ed]…and let you know all about it.’ It is unclear if he was able to fulfil his wish and until recently his name was just one of many killed in the daily business of holding and supporting the line. So, how did Evans die?

The War Diary gives scant information, merely noting that on 13 March ‘Lt Geadin to hospital wounded, 5 O.R.s killed and 21 O.R.s wounded’.  Clearly Evans and Leigh were two of the five other ranks killed on 13 March. Further clues were found in the Weekly Mine Reports. The report for 13 March makes no mention of casualties (it may have been written before the losses were incurred) but the following week’s report notes the construction of a Battalion HQ accommodation dugout at Mosselmarkt ‘was delayed1½ days owing to casualties caused by enemy gas shelling and 1 night owing to scarcity of timber’. 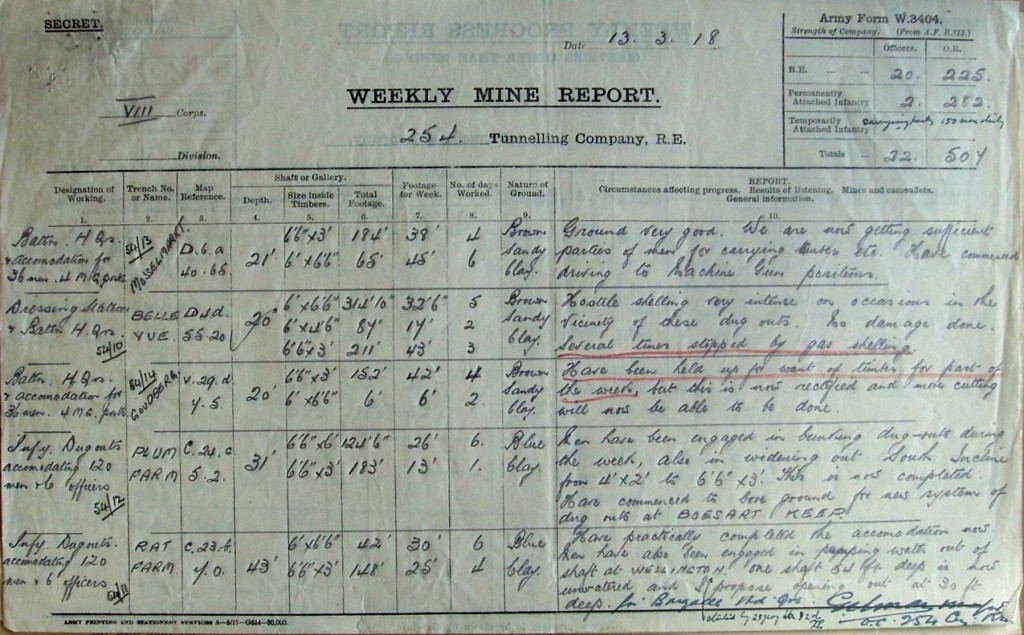 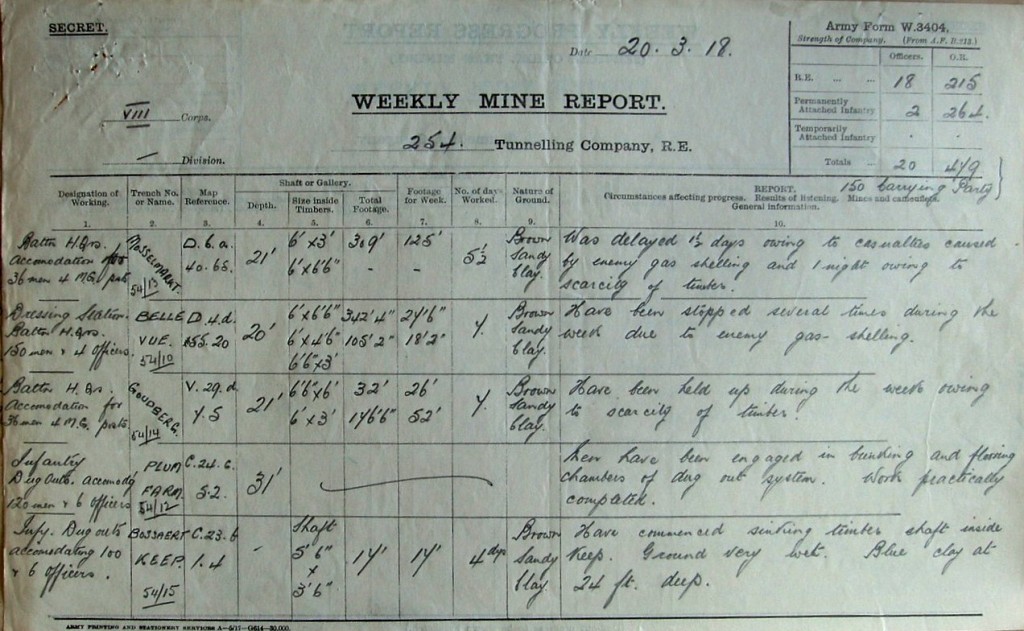 As there are no other mention of casualties in the reports it seems logical that Evans and Leigh were working at Mosselmarkt and were killed or fatally wounded by this gas attack.  The only other casualty from 254TC located in this period is Sapper John Dungavell who died on 15 March and is buried in Nine Elms Cemetery near Poperinghe. It may be assumed that he too could have succumbed to the gassing.

The Debt of Honour records on the CGWC website for Isaac Evans show that he was the husband of Gladys Mary James (formerly Evans), of 14, Pleasant View, Tirphil, Glamorgan. In time we will be looking into Evans’ story in more detail. If anyone has any further information then we would be delighted to hear from you.

Please click this link for details of Corporal Isaac Evans on the CWGC Debt of Honour database.